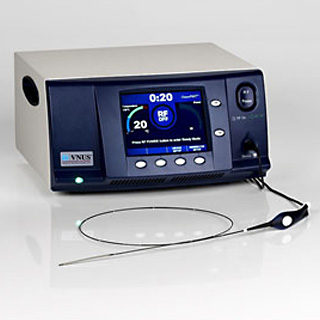 Radio wave therapies such as ClosureFast/Venefit® or CELON-RFITT work with an electrically generated heat effect. The treatment with radio waves is technically easier (probe instead of catheter system) than with earlier lasers (modern lasers also work as probe). Therefore, radiofrequency is traditionally popular with new, less experienced users.

In the USA, ClosureFast/Venefit® is the most common because it is the simplest system, but as the Americans (and many Swiss) use it - with 500 to 800 ml of anesthetic fluid - the success is average at best.

As with all angioclinic® methods, the angioclinic® Venenzentrum Zürich also offers a special optical control (ultrasound) and an exact adjustment of the venous diameter (CPLA, coaxial perivenous local anaesthesia), resulting in a well-dosed and particularly precise application.

A newly developed radio wave system (EVRF, F-Care) could have advantages in the rapid regression of the treated veins. The research department of the angioclinic® venous centers is also working on a further optimized radio wave.

Phone 044 482 30 30
Email: This email address is being protected from spambots. You need JavaScript enabled to view it.

Request for an Appointment »